5 replies to this topic

Eric Johnson is on the short list of all-time guitar heroes, along sides musicians like Jimi Hendrix, but his creative path has taken some interesting twists and turns and has always landed him successful. He has earned critical and commercial success, a Grammy and a huge following of fans. However, his story as a guitarist, vocalist, keyboardist, songwriter and producer is not a typical one at all. But this three-decade journey has led to his new 2005 Favored Nations studio album Bloom.

'Bloom' features 16 new songs ranging the stylistic gamut, which has always been Johnson's approach on his solo albums. He is one of the precious few musicians to fully succeed artistically and commercially with this philosophy. The rock 'n' roll raveup Summer Jam fits alongside the bright Bob Dylan cover My Back Pages, the hypnotic and beautiful Sea Secret, lyrically provocative Sad Legacy and the country jam Tribute to Jerry Reed. His already-astonishing gifts as a songwriter and producer, in addition to his jaw-dropping guitar technique, have grown substantially on this album. Bloom will appeal to Johnson's longtime fans while also bringing new ones into the mix.

By the time Johnson had reached his teens, he was making waves on the Austin scene. At 16, he was a member of a band called Mariani and by 21, he was part of Electromagnets, a jazz-rock fusion band with an intense cult following but their album sales did some lacking.

He recorded his first album, Seven Worlds, between 1976 and 1978, but it was not released until 1998. Ark 21 issued the album with Johnson's blessing. A previous manager owned the rights to Seven Worlds.

One of the most important breaks of Johnson's career was a 1984 appearance on the PBS television show 'Austin City Limits.' Reportedly, Prince saw Johnson's performance and recommended him to his label, Warner Bros. Records. The Warner subsidiary Reprise Records signed Johnson, and 'Tones' was released in 1986. Prince band members Wendy and Lisa even sang uncredited background vocals. The song Zap was nominated for a Grammy Award for Best Rock Instrumental. Johnson had already earned considerable coverage from the guitar magazines at this point, and their chronicling of his career increased rapidly.

Johnson's breakthrough into the mainstream occurred with 1990's Capitol release Ah Via Musicom. The buoyant, cascading instrumental Cliffs of Dover enjoyed mountains of radio airplay across multiple formats. The platinum-selling album was nominated for a Grammy and Cliffs of Dover itself earned Johnson a Grammy for Best Rock Instrumental, topping fellow nominees the Allman Brothers Band, Danny Gatton, Rush and Yes. The smooth, supple instrumental Trademark is another highlight. Ah Via Musicom gave Johnson the distinction of over being the first artist to have three instrumentals from one album reach the Top 10 in any format.

In 1996, Johnson returned with 'Venus Isle' on Capitol. Notable songs from it include S.R.V. (a tribute to his friend, fellow Austin native and guitar legend, the late Stevie Ray Vaughan) and "Manhattan." This album illustrated Johnson's growth as a songwriter, producer, vocalist and, perhaps most surprisingly, keyboardist. He promoted the album with the massively successful, first-ever G3 tour, which also featured his friends and fellow guitar virtuosos Joe Satriani and Steve Vai. Johnson has since recalled that tour as being the "tour from hell"

One of Johnson's side projects, apart from his own albums and guesting on other artists' albums, is the blues trio Alien Love Child. The group's 2000 album Alien Love Child - Live and Beyond was Johnson's first project for Favored Nations, Vai's label. The song "Rain" was nominated for a Grammy for Best Pop Instrumental.

2002 saw the release of Souvenir. This popular collection of 12 previously-unreleased demos, outtakes and live recordings spanning his entire career.

Johnson went on to surprise his fans, yet again, with a solo acoustic tour in 2004 showcasing his acoustic guitar and piano skills. He was also honored by Martin Guitars with his own signature acoustic model. That summer, he was also invited by Eric Clapton to take part in the Crossroads Guitar Festival. 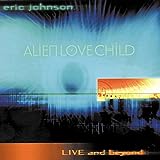 Phew that was a lot of work and research. Be thankful, that took over a hour to do

No problem, that was a fair bit of work but I enjoyed doing the research, I had nothing better to do anyway

o im thinkin of jack johnson...
i wus about to right all this bad stuff about him

...the cat went to rehab

Thanks for the pictures.
Eric looked hot at the awards but he was also very humble when he recieved his reward
His wife looks beautiful.