4 replies to this topic

So I've got a song that I want to record but I kind of want to imitate the way that Chet Bakers voice was recorded for My Funny Valentine,

I'm using garage band and my flat mates mics which are;

and one of these as pre-amp

...any ideas is greatly appreciated

That should actually be relatively easy as the sound you're going for is an extremely dry vocal.

So I'd say, set the singer up in a small area of the room with as little reflections as possible coming off the walls, you don't have to go all expensive with the soundproofing and padding, just hang up a thick curtain, you could even just be standing around the singer holding a heavy blanket up.

If the vocal style is the same (i.e. in the volume), you'd want to be really close to the mic - have a filter ready though for the proximity effect increasing the low bass rumbling - or experiment with a position, probably 4-6 inches away should be fine

Other than that, there's no technological secret, even the compression is gentle, just to remove the biggest peaks between the transients.

Ah brilliant thanks Igor, could you help clear some the technical jargon with me if that's alright


How would I go about this, do you mean a filter within garageband?

even the compression is gentle, just to remove the biggest peaks between the transients.


is compression something that I set in garageband also or is that do with the mics?...

I really have no clue when it comes to this stuff...

A filter is usually a term for a process ( usually a device or software plugin ) that acts as a frequency equalizer. However, I meant a pop-filter

A small screen you place before the microphone that prevents the more aggressive air blowing into the mic. It stops the sound of breathing and bass heavy and or popping sounds usually occuring on pronouncing "b"'s and "p"'s. It also keeps the mic from getting wet with particularly enthusiastic singers. 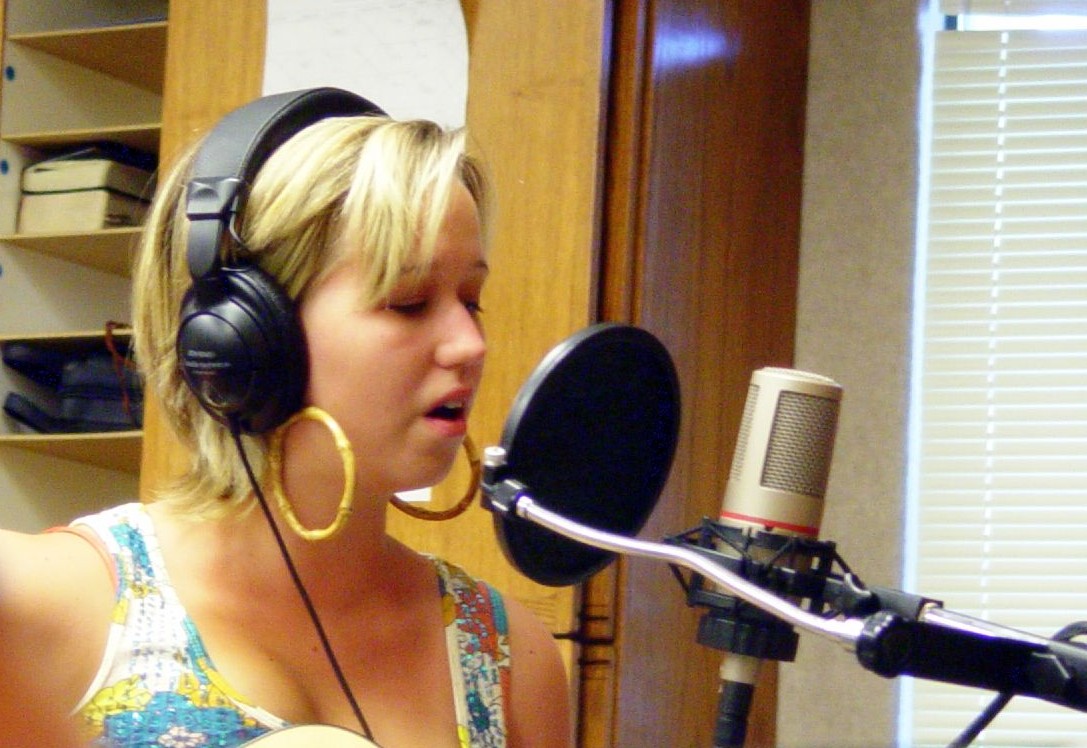 You could easily make one btw by just taking a pair of nylons and stretching it over a clothes hanger.

Compression is a process - nothing to do with data compression as it occurs with MP3s!! - that basically keeps the levels of the sound more or less even. For instance you could shout one word and then whisper a few others. While this has a great dynamic range - and thus interest to the listener -, if you were to do this over a full backing band chances are you wouldn't be able to hear the whisper, so you turn up the volume of the vocal. This causes the scream to be over the top loud or even to distort. Compression acts as the mediator making sure the volume of both the scream and the whisper are even, so the overall track volume stays more or less the same. Of course, this has to used in context and to taste to prevent a vocal (or any sound really) from sounding "flat" and bland and removing overall impact, ideally you just want an even sound signal that doesn't sound like it has been tampered with. Popular use today is to have a compressor work next to an aggressive element in the mix ( such as the kick in dance music ) where the compressor ducks the signal during the kick and ups it between the kicks. But let's get to the point:

A compressor is either a piece of hardware or a software plugin that acts as a signal processor and I'm sure Garageband has one. A compressor has several parameters, often changing between brands and types, but the most common parameters are:

threshold, when a signal exceeds the threshold the compressor kicks in and the sound is "squatted". Set it so only the loud sounds receive compression if you wish to tame a signal.

ratio, exactly that, how much the outgoing sounds volume is altered relative to the incoming sound.

attack, how fast the compression should kick in after a peak has exceeded the set threshold. This allows you to create gentle fades instead of radical volumes dips, once more use to taste and context

release, the time it takes for the signal to return to the original level once the signal returns to below the set threshold.

It's one of those utilities that doesn't seem too spectacular in itself, but when used in context with other instruments / in a mix it becomes a necessity to get an even balance.

However within the context of the Chet Baker song, the vocal compression shouldn't be too extreme, just look at the meters - or better yet listen to the sound - and make sure the response is even.

Ah gotcha, I had thought you meant pop-filter which I have...I'll play around with the compressor I think I just need to know what everything sounds like [even though you've described what will happen] just so I know for myself...

One more question already been a big help but which of the two mics do you think would be better to record this type of sound with?

Also tagged with one or more of these keywords: ...