Everything President TrumpThe morning after thread


69 replies to this topic

I'm figuring a comprehensive thread of what will undoubtedly be the most interesting President in United States History.

For instance: he likes peeping on russian prostitutes apparently.
Opine:

He's not president yet. There's still the chance he dies or something!

War could also be declared and Obama could carry on for another 4 years if the world war pattern holds. Or alien lifeforms could intervene and be like "NO. THAT'S A BAD BAD EARTH. SLAP YOUR HAND, I WILL!"

This is going to be great. It's like you have your very own Rob Ford.

he's not gonna kill us all though i don't think*

*random thought not linked to anything else

I'm a pyrotechnician, if you see me running, try to keep up

OK Go is officially the best ever.

Random thought: the last 8 years of the Obama Administration has been an objectively positive one. Economy, quality of life etc....so why...how could this clown have won? He isn't smart, hes amoral, he has no plan or knowledge of government workings. He's old, Ill tempered, vulgar, narcissistic....there's nothing good whatsoever to be said about him.
I honestly don't understand by what criteria his supports measured the pros and cons.
Any of the things said about Trump would have been enough to ruin any other candidate. How?

Is there even criteria? Or is it all a dumb show?

I think it was a hail mary attempt on behalf of the anarchists out there that just wanna say "Fuck this dog and pony show. Sort your shit out world, we out!".

And I'm sure I've pontificated on this point before, but the non-voters inadvertently contributed to this hail mary by also quietly saying "Yeah, no. Fuck no am I picking between these candidates. Whether the fire is blue or red, we're gonna burn regardless so fuck it. Fuck you. Fuck off."

On the upside, it proves a thousand fold that any one of you bastards can run in the next election. I kinda like that. Prime Minisderf. Yeah. Yeah!

I'm a pyrotechnician, if you see me running, try to keep up 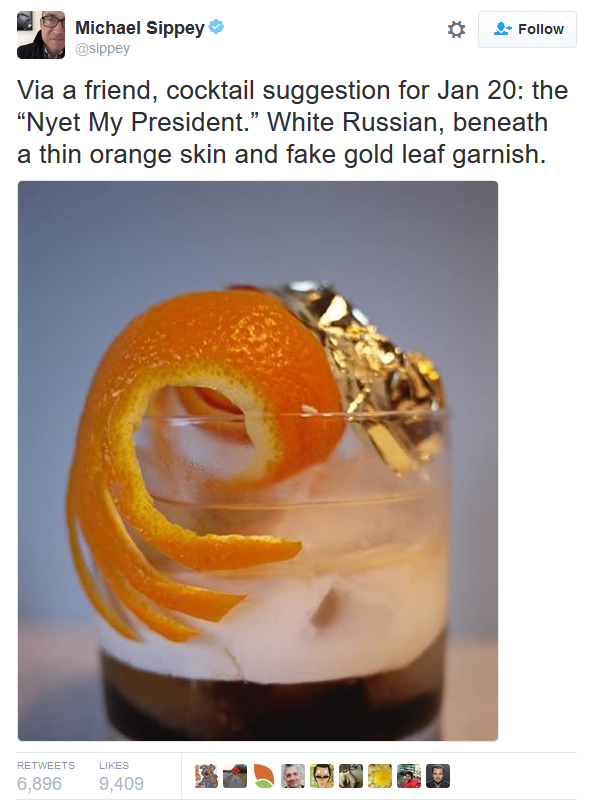 the continuous and obvious favour paid by the neo-liberal agenda to those in the top 1% at the expense of millions of working people despite modest economic and (debatable) positive social gains led people to abandon the democrats who felt that they could bully a seriously flawed candidate into the whitehouse.

the major win here is that even if the democrats had done the prudent thing and allowed their own populist movement to gain traction is that had bernie won he'd be faced with a republican house and senate - all his talking points would have been just that. now, you have the opportunity for fascism to creep into your country. this is great news, because i sincerely believe most americans will reject it, like sending back a terrible meal. unfortunately you're all going to keep eating in this shitty orange diner, but in 2020 a truly progressive candidate may have a chance to earn not only the presidency, but a true mandate for change.

im pretty sure i just paraphrased something unpopular that was said by susan sarandon a year ago.

Bernie Sanders would not have won. Wishful thinking from the hard-left. If anything, I suspect that part of the reason Trump won is because of Sanders supporters backing him. I have a sneaky feeling there are more of them than the margin of victory.

Biden would have won it. The Democrats should be working hard to persuade him to stand in 2020.

I agree thy Biden would have won it, but they'd be foolish to draft him to run in 2020. Democrats should consider Castro or Booker; they need a purge and rebirth.

I agree thy Biden would have won it, but they'd be foolish to draft him to run in 2020. Democrats should consider Castro or Booker; they need a purge and rebirth.

Booker is definitely an opportunist and shallow self promoter, but he has the right charisma to take the election.
If we're considering electability and not substance of course.

Booker is definitely an opportunist and shallow self promoter, but he has the right charisma to take the election.
If we're considering electability and not substance of course.

U know Booker is my name, right? lol

Run you shallow self promoter lol

We could probably keep trump distracted for the next 4 years with a coordinated twitter trolling campaign.