The purpose is basically to learn about other guitarests on this forum. You don't have to fill out fields if you don't want to, but it would be nice if you did. (for example, if you don't want to give your name, don't.. but i like to refer to people here by their name if i know it, adds a more personal feel)

This questionnaire isn't limited to acoustic stuff (though I insist you play acoustic guitar upon occasion to post here), go ahead and post your gear/experiences/ect with other instruments.

With that said, here's the form to copy/paste into your own post (just copy and paste this): 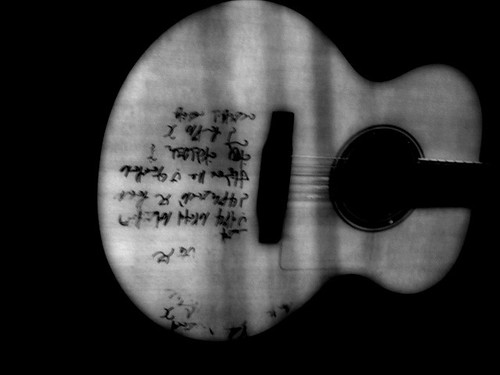 Name: Sammy Watson
Age: 20
Location: North Carolina -- Representing the East Coast, Baby!
Years playing: 7
Gear --
-- Acoustic: Rogue, Epiphone AJ18SCE Acoustic-electric, Ovation celebrity custom (ok its not MINE mine, but it stays at my house -- belongs to a friend who never plays)
-- Electric: Gibson Epiphone
-- Other 4 piece double-bass pearl export series, PA- Crate PCM-8DP mixer, 2 120W Soundtech loudspeakers, tons of cables and 4 mics (yes, i carry all of that with me when I go gigging).
Musical Wishlist: I'd love to own a Takamine and/or taylor
Influences: Shane Barnard, Trent Monk, Jeremy Camp, Ed Cash, David Crowder, a few others.
Style(s) of playing: Mostly Christian music, I don't venture far
Regular Gigs: I play a semi-regular gig at the local coffee shop, I play drums each sunday for the worship team at church (contemporary worship), I play at another church thing on a regular basis.
Greatest moment on stage: I can't think of any moments that stand out as being great, but I was tickled pink when I got down from a 2 hour show to hear that I had a hole in the crotch of my pants (i was sitting on a stool, legs spread wide).
Solo Artist, or Band Member? I do mostly solo work, but I do have an acoustic team that includes another guitarest, an electric guitarest, drums, bass, and 2 femle vocalists.
-- If applicable, name of band: Douloi Ek Christous
String preference: Martin Sp+
Any other information? As of now, no, I can't think of much.

Greatest moment on stage: never been on stage..... yet
Solo Artist, or Band Member? Just got my first band together
-- If applicable, name of band: Not decided yet
String preference: love d'darrio and RotoSound
Any other information? Not really just that if I played guitar as much as I play video games then id be frikin Page by now

but other than that um Scarface is the greatest movie ever.

It's a good idea to have info like that.

"Grzeg (...) spending years in the Vistula River Delta picking Miss Takamine with a bottle-neck on his finger!)" - Dadfad

-- Other: Harmonicas, a keyboard, tin whistle, Zoom 504 MultiFX unit for acoustic guitars.
Musical Wishlist: Some nice Taylor or a Takamine Hirade Series or maybe a Martin
Influences: Dubliners, Christy Moore, Ralph McTell, Pogues and many other Folk musicians...
Style(s) of playing: (Irish) Folk, Singer/Songwriter, a little Country maybe.
Regular Gigs: Aye
Greatest moment on stage: Just me and my Takamine sitting on a barstool playing in a theatre to 1,350 people

Solo Artist, or Band Member? Both, having a band that contains: Fiddle, guitar, banjo and percussion and my solo artist "lineup" would be me (Hah.

) on acoustic guitar, harmonica and vocals.
-- If applicable, name of band: Folk Mahone
String preference: Martin Phosphor Bronze
Any other information? Can't think of any at the moment. Sorry....

Name: Corey
Age: 18 in February
Location: South Carolina
Years playing: 2
Gear --
-- Acoustic: Ovation Elite 1868; Epiphone PR-650 from late 70's, early 80's
-- Electric: Schecter C-1 Classic
-- Other Marshall MG30DFX amp and Boss Tu-2 Pedal style chromatic tuner
Musical Wishlist: US made Jackson Randy Rhodes; Gibson SG Standard; Jackson SL-1 Soloist; Marshall Mode Four Half Stack
Influences: the guy from Lynyrd Skynyrd; Angus Young; Eric Clapton; Richie Blackmore; Tony Iommi
Style(s) of playing: Hard Rock; Power Ballady stuff; I try to play Metallica-esque Metal but am not quite that good yet
Regular Gigs: Nope
Greatest moment on stage: None, however I did play at my High School Homecoming Football (american) Game. I was showed up big time by a friend who plays bass.
Solo Artist, or Band Member? I guess you could call me a solo artist, I mainly play in my bedroom or for family and friends
-- If applicable, name of band:
String preference: Acoustic: Maritn Marquis (all I've ever used, but I'd like to try Elixirs some day); Electric: GHS Boomers
Any other information? Not that I can come up with right now.

Name: Eleanor Mollett
Age: 18
Location: London/Dublin
Years playing: about 3or4
Gear --
-- Acoustic: Martin 0001, Admira classical guitar
-- Electric: Jedson
-- Other A flute.
Musical Wishlist: Nothing much for now!
Regular Gigs: nope, i just play for myself in my room
Greatest moment on stage: see above
Solo Artist, or Band Member? well i guess solo
-- If applicable, name of band: n/a
String preference: i'm using martins at the moment
Any other information? not that i can think of.

My baby
Other:Flute, got a piano, picollo as well, though it's a glorified penny-whistle really. Erm...an old spanish guitar somewhere as well I think
Musical Wishlist: Eventually I want a Takamine acoustic, but I can be patient. Hell, with my budget I have to be!
Influences: Goo Goo Dolls, Counting Crows, Alternative music in general
Style(s) of playing: Folk, light rock / alternative rock
Regular Gigs: I wish! Not as of yet; give it a while
Greatest moment on stage: Simple gig at school; crowd-surfing while soloing!!
Solo Artist, or Band Member? Band
-- If applicable, name of band: First and Foremost
String preference: Steel, nothing more needs to be said! Thicker gauges as well, I prefer the tone and lack of constant snapping! Otherwise unsure!
Any other information? I messed this up the first time I filled it out; it all came out bold. Damn technology!

Look out on a Summer's day, with eyes that know the darkness in my soul...

Haven't posted on the GTU forum in a long time...

Name: Cody Burchell
Age: 15
Location: Texas
Years playing: Nearly 2
Gear --
-- Acoustic: Takamine Jasmine S-35, Yamaha FG-75
-- Electric: Squier Bullet
-- Other An old mandolin and an old piano
Musical Wishlist: Not much besides a bigger amp, and a capo and a slide
Influences: Gary Jules, Jimmy Page
Style(s) of playing: Folk and Blues
Regular Gigs: Have not had a single gig yet
Greatest moment on stage: That will probably be my first moment
Solo Artist, or Band Member? Mostly solo, just started getting into a band
-- If applicable, name of band: Do not have one yet
String preference: None
Any other information? Well, Im pretty poor, or else I would have much better equipment by now. I was self taught on my mom's old acoustic, and have got pretty good on my own but I start official lessons this next thursday.

Musical Wishlist: a maton or, wish of wishes, a Martin accoustic like my uncles! i've never played anything more beautiful but now he's been blacklisted from the family and i dont' get to play it anymore
Influences: john lennon, bealtles in general, joni mitchell, jewel, john denver, don mclean, david bowie, green day
Style(s) of playing: folk, accoustic rock
Regular Gigs: just infront of my mates around the campfire if i can pluck up the nerve
Greatest moment on stage: once i did a solo song during a small gig in the bistro at uni. i was nervous but i did it and i'm proud, that was three years ago tho
Solo Artist, or Band Member? definitely solo, i can't even handle having people sing along
-- If applicable, name of band: i was almost in a duo called Anatame, (pr: anatomy), it lasted a couple of days only
String preference: D'darios, the blue packet
Any other information? ummmmmmm, i wuv sammy

Laws, as effective a deterrant as broken condoms for birth contr

Influences: Hm. Knopfler, Eric Johnson for his combined pick & fingers useage on the electric guitar... acoustic-wise, SRV's acoustic stuff, Sonny Landreth (brilliant fella), Lowell George... too many, actually.
Style(s) of playing: Anything and everything. Except for classical, actually. I dabble in metal, dabble in rock, blues, I know a few jazz standards...
Regular Gigs: None.
Greatest moment on stage: A stage? What's that?
Solo Artist, or Band Member? Neither. I'm far from being an artist.
-- If applicable, name of band:
String preference: Electric: d'addario .10-52, or 11's. Acoustic: martins.
Any other information? Homo Homine Lupus.

Name: jessi
Age: 16
Location: minneapolis
Years playing: 1 1/2
Gear --
-- Acoustic: umm.. a squire acoustic, it sucks, but it gets the job done, since i don't perform
-- Electric: standard strat, little crap 10 watt crate amp...
-- Other: hmmm... flute, trombone, piano, keyboard, harmonica, my enchanting voice, and a few kazoos!
Musical Wishlist: fender jag-stang as of now, and i'm still on the lookout for a kapa minstrel
Influences: eric clapton, kurt kobain, john lennon, johnny cash
Style(s) of playing: all sorts
Regular Gigs: nope
Greatest moment on stage: well, there was the time in choir a loooong time ago when i had to run around the auditorium yellin "YEEEEHAW". i'm sure that looked as entertaining as it felt
Solo Artist, or Band Member? solo, working on getting a band together
-- If applicable, name of band: well, i've always dreamed of having a band called the Painful Hiccups
String preference: ??? whatever i get my hands on, havent been playing long enough to be able to compare i guess
Any other information? nope

Name: Cian
Age: Fifteen
Location: South of Ireland
Years playing: Three now, still getting nowhere!
Gear -- Yes please
-- Acoustic: Hohner western series dreadnought, Oakman acoustic electric, and Gibson J185 on it's way.
-- Electric: Epiphone ES175, Alexis Les paul
-- Other A few harmonicas, Line 6 Flextone II, effects pedals.
Musical Wishlist: My next aimed purchase is either an old gibson country and western, or a nice martin. The gibson will do fine for now, but a few years down the road maybe.
Influences: Rory gallagher is the main one. Hayden is great. Harry manx is amazing, allthough i could never match... That should be a wide enough spectrum. Actually, david gray is not all that bad. Well... Sort of! Yeah.
Style(s) of playing: Mostly... What would you call it, acoustic rock? That's what i'd like to do if i had a singer.
Regular Gigs: Not as of yet, unfortunetly.
Greatest moment on stage: None worthey of mention, unfortunetly.
Solo Artist, or Band Member? I'd like to be a solo artist, but since i cant sing, i'd have to be a band member. I play lead guitar in a jam session thingy...
-- If applicable, name of band: No name yet, we're only getting started.
String preference: Elixirs whenever i can afford them. For the hohner acoustic, whatever is cheapeast will do.
Any other information? Great idea!

Name: Meaghan
Age: 14
Location: The Great North! (Canada)
Years playing: 1 and a half!
Gear --
-- Acoustic: Yamaha
-- Electric:
-- Other
Musical Wishlist: A Martin or a Takamine!
Influences: Jimmy Page
Style(s) of playing: Mostly Rock or Christian.
Regular Gigs: Nope!
Greatest moment on stage: Hmm...Probably the first time I sang solo. That was fun!
Solo Artist, or Band Member? Solo for now! I'd love to be in a band though, if I could find some members!
-- If applicable, name of band:
String preference: D'Addario
Any other information? I'm in about a million choirs (ok, maybe I'm exaggerating a bit). And I don't play any other instruments besides acoustic guitar.

Back to Acoustic Guitar Discussion

1 user(s) are reading this topic