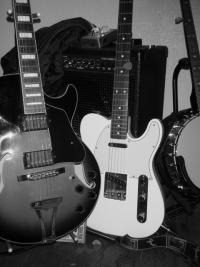 halfmoonbay hasn't added any friends yet.

In Topic: I know that this is usually in the Discussion forum...

Except it was lashings of Laphroig single-malt 18 year old.

I approve, had some of their 18y/o recently, very drinkable.

And a much-belated happy birthday.

Drive By Truckers, played Kilkenny last year, Set Theatre, May 2011, stunning gig. Wilko Johnson played that week too. Kilkenny Rhythm and Roots festival 15th year running this year. This year Alabama Shakes headlined, Amanda Shires, Israel Nash Gripka were great too.. Great gigs, Drive-By tickets sold out in a day or two. Over the years Ray laMontagne, Ryan Adams, Scott Miller and the Commonwealth, Alejandro Escovedo, John Prine, Buddy Miller, Laura Cantrell. An embarrassment of music. We've also had Pokey LaFarge and The South City Three, playing to 50 people, one of the best gigs ever. The Jools Holland 'discovered' them 6 months later for his New Years eve gig. [media] Every May get down to the South East.

Heard the Truckers played Kilkenny. Unfortunately I couldn't make it. Saw them in Manchester a few years ago. They're amazing live. I used to have a CD of some very rare live stuff of theirs (courtesy of voodoogav, if you remember him?). But I lost it. I have no idea where it went. There was some really cool stuff on it too

I saw the DBT at Manchester Academy on their Dirty South tour, great packed-to-the-rafters gig at a time where they were arguably at one of their peaks. Fantastic performance to a good crowd. Left work and got a train down country, went to the gig, had a night on the town before getting the 5am train back North and walking back into the office first thing..... was dead on my feet by the afternoon but was well worth it.

I went on a pub crawl with Gav some years ago, decent bloke and a shame he quit GTU really.

In Topic: Looking for a decent pedal

Maybe worth trying a Boss Bluesdriver, I've used that in the past when I've plugged the guitar straight into an eight-track recording unit rather than use an amp.

The Bluesdriver is one of my favourite pedals and of the most versatile overdrive units I've used. The fact that it is called a 'Blues Driver' is a bit misleading perhaps as whilst it can be 'bluesy' it can be applied to a wide range of styles. Not a traditional transparent overdrive like the Tubescreamers, it's a lot more gainy and ballsy. It's as much as rythmn guitarists pedal as it is a lead guitarists pedal - there's some great settings for rythmn and riff work. I tended to bring the Bluesdriver

I've bought a couple of guitars unseen. The first was a higher-end electric that was batch-built to order. The next one was the Tele in my profile picture, mid-range MIM, I'd played similar and was reasonably confident of Fender's consistency in that range, it'd sound how I wanted it to sound and I know my way round them well enough to be able to set it up to my liking if I'd needed to. Different situations and different price-points but in each case I was reasonably certain of what I was going to end up with. If I wasn't familiar with that range of guitars and I wasn't confident of the consistency of quality then I'd have been less inclined to go ahead. Perhaps easier to say that with electrics.

Tempting as it may be to get a good 'deal,' it's false economy if you end up getting a guitar that's not quite what you wanted.

In Topic: My current board

Excellent, thanks for sharing.