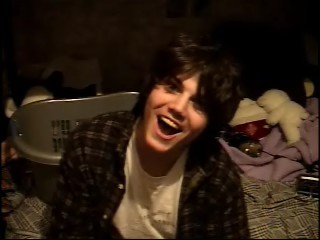 ConfuciousDragon hasn't added any friends yet.

The BC Rich Experiment

I am beginning an experiment on the BC rich as a guitar. I want to discover exactly what about it makes it such a bad guitar. Of course, I know it's probably everything. But, can it be manipulated into sounding and playing nice?

I guess I should explain the situation a little more. I am at school, and I only own one electric, which I am in love with very very much, and that's my Peavey Raptor Plus. Now I honestly feel that I may never need an electric better than that, of course I'll still get other electrics, but that's not because I think my Peavey sucks, it's because I want other features like a string thru tailpiece and an FR, and so forth... But my Peavey was only 160. However, my Peavey is needed for gigging and recording which is done on the weekend... and on the weekend I stay out at my girlfriend's house as opposed to my dorm during the week. So, I came up with the solution of swapping my girlfriend's BC Rich to my dorm, and leaving my Peavey out there.

Now let's give a little background on my girlfriend, just because I feel saying she owns a BC rich kind of degrades her... so... she has been playing guitar now for almost 5 years... she began with a squier. Soon switching to a BC Rich. She had played on it until early this year, when she finally got the cash to shell out for a 2 grand guitar... the Jackson King V. This is something I tried to talk her out of... and something she's been regretting for a while... but at the time she thought that money translated into quality, and the only way she would get a good guitar is if she shelled out the cash. She knows better now... as she has an ESP Alexi signature that plays 10 times better than the Jackson that she got about a month ago.

Anyway... so as I take this guitar I want to really try and make it a guitar that people will think was a pretty good guitar if they played on it and heard it. And I am going to document this the whole way through... I have already begun the process... but not to any real length... When I got the guitar the first thing I noticed was how ######ty of a setup it had gotten. The neck was warped, and the strings were floating about a half inch above the fretboard. I fixed that immediately. I then had to solder the jack back in because it had fallen out, and I found something out that I found extremely peculiar about BC Rich... the wire hadn't been stripped... what they had done was used the rubber as solder. I can't imagine this not affecting the sound... After all rubber does not conduct electricity... and would certainly increase impedance... so I fixed that. Then I changed the strings, when changing the strings I noticed that the bridge is fairly ######ty... You have to change all the strings at once, because you can't remove them one at a time... and it leans forward towards the pickups... which points to me that it is a ######ty bridge... it also just seems like it wouldn't allow for much sustain. So I'm deciding whether I want to swap it for a string-thru tail piece (which will be a painful amount of work) or just a stop tailpiece. Would the stop tailpiece allow for a decent amount of sustain? or should I just do the work to make a string-thru bridge?

I then have to decide on the other features I may swap out... Electronics, the nut, the tuners... I'm not going to say the tuners just yet, as they haven't proven to go out of tune easily, but if I do... I saved my tuners off my peavey before I swapped them for auto-trims... and so I may just throw those on seeing as how I know they stay in tune. But I do know that the guitar may be completely different when it is returned to my girlfriend's hands.

I am a classical guitar major at Roosevelt University, and, at this point, am definitely the worst of the 9 in the program... But that's ok, because I'm the only freshman, and half of them are grad students. However, having listened to these people play, it is very difficult for me to believe that they can get better. Even if they can, would it matter?

The other day I saw my instructor SIGHT-READ Paganini's 24th Caprice. The rasgueado section... in time... and buzzed on only one note. Dynamics were there... It was a near-perfect performance... off of sight-reading. Is there really anyway that he can get better? Sure he could get to the point where he didn't buzz on that note... but seriously... the second time around it would have been perfect. One of the Grad students at a performance class played his piece so well, that the instructor could barely find anything to critique (and it was mostly about bringing out crescendos a little more). When you're at that point, why does it matter if you get any better?

I used to agree that everyone could always be better. Now, I'm not so sure. I mean, sure you can be better, but does it really matter? Once I can sight-read the 24th caprice, I have to admit, I think I'm done learning. I mean when you talk about the "greatest guitarist ever" can we ever really decide? At the end of their master's degrees, all those students play at a level where I couldn't tell you who is better. They're all right on par with each other.