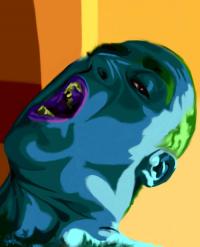 to follow traditional a dogma (be that one of vehament unbelief, or of devotion) against what you hold to be a truth inside (ive yet to meet the taught ideology thats hand in glove with reality - and im including science in that lot). we all get a proggrammed to believe something even if that something is nothing, but its good to ask yourself what you really think about stuff rather than just accept your long held assumptions. to be alive rather than to just live like some mindless zombie consumer who simply regurgitates whatever opinion their brain has fed upon during the last commercial break.

its good that unfortunatly im 86% johovis witness, ive got to be winning

(100% mainline to liberal prodestant, but its hard to answer what you really believe rather than what you've been preached though dont ya think?)

I'll be dead before I'm 30. Which gives me less than a year.

edit2: pls dont tell me your a terminal patient, man i feel the bad

Er.....you were on about your negative reputation

and who said musicians weren't tempremental - but on the bright side i dont think anyone hates you waz, in fact some ppl must like you coz when i checked your rep before it was about -44 and then just now, only -33. i think its more a measure of how much social agreement there is with what youve said. look at mussolini for instance - (a bad guy in wwii, hung in the street by his own ppl, friends with hitler, but) we do give him rep for making the italians not so lazy

i cant even remember the old one now - i mean honestly, glorifing 'the good olde days' of yesterday (when you had to italicize a c to say fuck) is just lame. lets break out the rocking chairs and whine on about how good things were back when we all had rickets and cholera

woggs you have a beautiful mind sir,

one day, i hope, you will discover that you are in fact one of a hand full of survivors of the last war of man. the test tube children of the remnant dna scraped from the bleaching bones of the death of humanity. now sadly finding the only escape from your own confines to be beating your own brain against the glass walls of your own reality. its nearly real enough to touch, but the palpable darkness in this place is compareable to a borne blind man and one born with sight. ohw how you dream of the hours when the machinica are not just measuring the firing of your synthetic replecant neurons, but instead are engauging with them. a world where you are no longer on your own.

a dripping tap noise that turns into some oceany noise maybe? or a rocket taking off and then 'hi im bernard...' in a spaceman like voice, with bleeps et al. their both quite obvious things that suggest depth. how about a muffled little kids voice stuck down a well, and the you say 'hi im the big b, and now your safe...' dont even mention radio just be old sckool dj in the voice, so as not to freak ppl out

boring but true, do you know the man (chip talyor) who wrote the troggs hit 'wild thing' later wrote the decidedlly (imo) more sing along-ably-to famous gillette 'the best a man can get' (cue top gun areoplanes and punching the sky, go on we know you want to) jingle. hes also angale.. angleen... balls to it, it hes john voih... john voghit.... brad pitts uncle-in-law. apparently an advertising jingle is all hook. its like comparing heroin to calssical music. i say stand outside the playgroup schools door and secrectly inject the little kiddies mothers nipples with hard boiled sweets. hooked for life.

obviously ive never written a successfull jingle (i dont think 'genital warts, genital warts, dont just rip them off, coz it ****ing hurts', catchy as it is, it isnt exactly on the tip of your tongue [thank god] is it). do you know who you should be aiming your jinge at? traditonaly sex, death and comedy are what ppl do as art (but i'd also suggest chocolate, as a subliminal panacea for all drug/chemically related addictions/desires, dont judge man, just look around) to sell to the masses, so just pump some of that up with some fairground flashing lights.

"Radio, radio radio radio (echoing), you want to give up a teste for"
"ovaries may come and go but we're the hits you'll allways know" (hahaha, ive just burst something from laughing)
''chocolate on your sexy bits, as your radio fires out the favourite hits''

though im guessing none of the above will be quite what anyone (even deaf ppl) are after. i hope i help to inspire you big d, even if im no real help

*that should have been menstrations come and go, gawd im an awful sexist